✕
Rate this page
Thanks for the feedback!
Your feedback helps us improve our website.
GLOBAL SELLING BLOG

In this blog, we'll tell you all about DGFT - an Indian government body responsible for supervising the import-export trade. 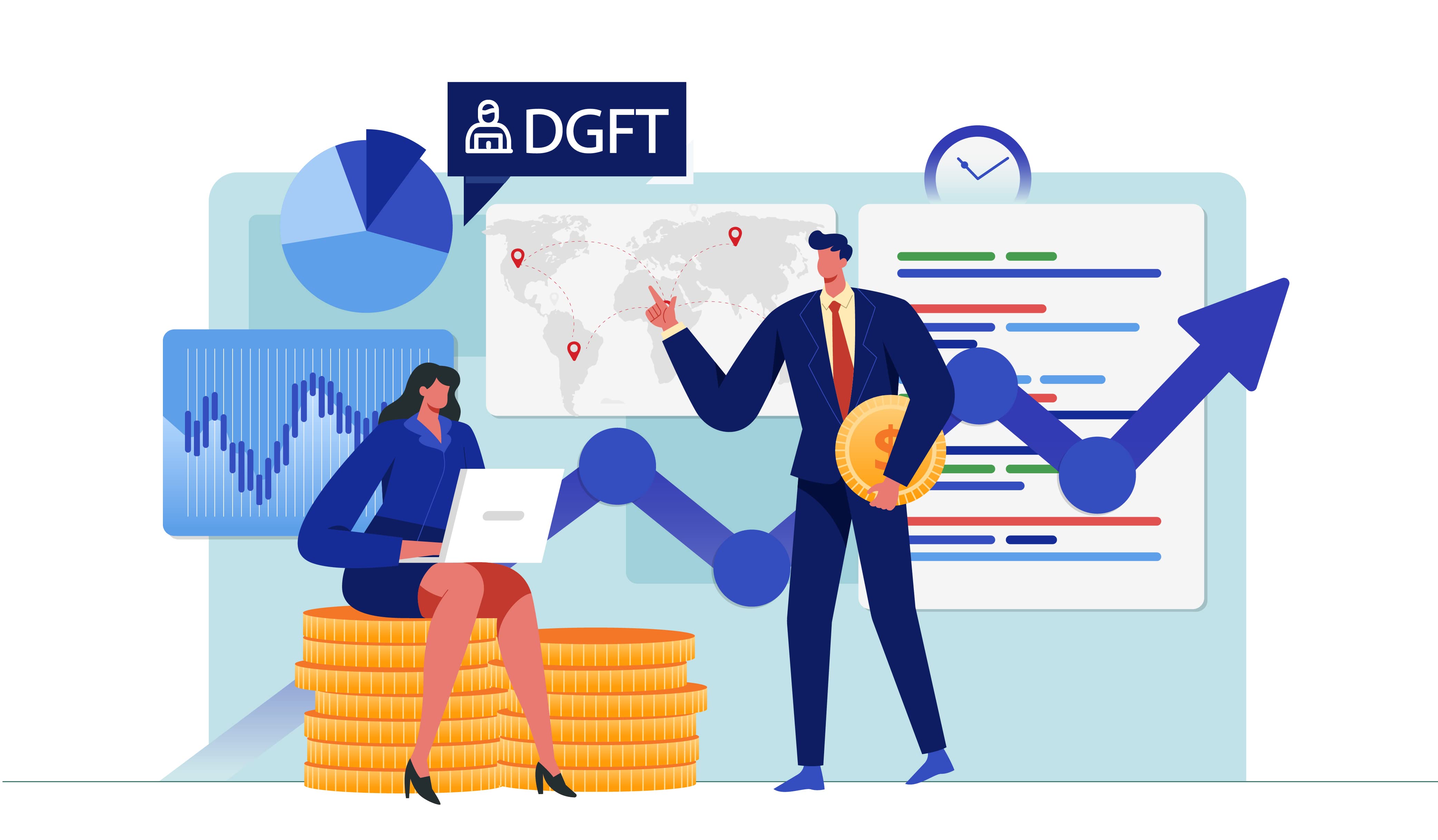 There's no doubt that India is one of the fastest-growing countries, especially in regard to export trade. According to the Ministry of Commerce and Industry, India’s export trade for April-February 2020-21 is USD 439 Billion (3,292,500 crores INR)1. As one of the top countries with export relationships with many countries, it is important to have an agency to build a bridge between Indian exporters and foriegn buyers. This is where the Directorate General of foreign Trade (DGFT) comes into the picture.

To make exporting easy for businesses, DGFT was formed as an agency of the Ministry of Commerce and Industry of the Government of India. Headquartered in New Delhi, it is responsible for formulating and implementing the Foreign Trade Policy of the country. As a government body, DGFT strives to maintain and develop exports and trade relationships with different countries, thus, assisting sellers in easy exports. It also issues export licenses and introduces trade incentives2.

Making it more accessible for sellers to start export business, DGFT has four zonal offices in New Delhi, Mumbai, Kolkata and Chennai headed by Zonal Joint Director General of Foreign Trade. There are 35 Regional Authorities all over the country.

Whether you’re an existing seller within India with a vision to start export business or you have a new idea, understanding the role of DGFT in export trade will form the foundation to expanding globally. Here are some of the functions of DGFT that we’ll explain before we tell you how to export from India:

How does DGFT regulate exports from India?

2. IEC to exporters and importers

Application for Importer-Exporter Code (IEC) has become hassle-free for aspiring exporters. Sellers can now apply for the 10-digit unique registration code issued on the DGFT website from the comfort of their homes anytime. The IEC is issued to assist in tracking and managing shipments of exporters and importers.
Also read: How to Apply for IEC

To maintain trade relations and seamless export and imports from a country, a set of guidelines is mandatory. The EXIM policy or Foreign Trade Policy provides that set of instructions to supervise export businesses. Developed by the DGFT, these guidelines are announced by the Government of India for a period of 5 years under Section 5 of the Foreign Trade Act 1992.

To facilitate the growth of foreign trade, India adopted the ITC HS codes (the international Harmonized System of Coding). These codes allow exporters to choose a product category and ensure commodity description are right. In India, the ITC HS Codes are divided into two schedules - Schedule 1 is for imports, while Schedule 2 is for exports. The DGFT has the power to add and make changes in description of commodities and adding new codes within India.

With growing international trade, the HS code was introduced globally to standardize and classify names and numbers of traded products. The HS is administrated by the World Customs Organization (WCO) and is updated every 5 years.

DGFT issues licenses for several products that can be exported from India. Most of the top product categories including textiles, home accessories, handicrafts, leather goods and more can be easily exporter. For an exporter to sell items that are classified as ‘restricted’ by the Government of India such as horses and a few petroleum oils, an export license from the DGFT is required. These licenses can be applied online on the DGFT website2.

Another important function of DGFT is to launch export promotion schemes under Foreign Trade Policy. Schemes such as Advance Authorization Scheme, Duty Free Import Authorization Scheme, and Deemed Exports have been implemented by the body to assist sellers. It also undertakes implementing “Ease of Doing Business” for exporters by simplifying and digitizing export-import procedures to promote foreign trade. DGFT also issues notifications, public notices and circulars.

To resolve concerns of exporters, DGFT addresses feedback, suggestions and any trade-related issue. It handles both complaints received from foreign buyers for Indian exporters and complaints of Indian importers against foreign suppliers through this platform. This way, it strives to maintain smooth export trade.

Why export with Amazon?

Exporting from India is no more a tough nut to crack. The export business game is not restricted to offline trade alone. With the growing internet penetration and increasing eshoppers across the world, a seller can become an exporter and manage his/her business from any part of India. Sounds like a dream come true?

With Amazon Global Selling, it indeed is! Launched in 2015, Amazon Global Selling is an ecommerce exports program that helps businesses from India start exporting and reach global markets. More than 70,000 Indian sellers from nook and corner of the country have successfully expanded their businesses to international marketplaces with Amazon. Here's why you should do it too:

Why limit to India when you can acquire new international customers? Amazon Global Selling takes your business to millions of customers across the world.
Learn more about Amazon international marketplaces

Diversify your sales all year round

Not just Diwali, make the most of international peak selling seasons & sale events like Prime Day, Christmas, Black Friday, and Ramadan, among others. Choose from 30+ categories to sell globally.
Learn more about listing products

Use Amazon's tools for easy expansion

You can focus on your business while Amazon helps you with international logistics like Fulfillment by Amazon (FBA) and customer service, among others.
Learn more about FBA
Register now
Published on April 20, 2021.

Sources:
1 https://commerce.gov.in/trade-statistics/latest-trade-figures/
2 https://www.dgft.gov.in/
Disclaimer: Whilst Amazon Seller Services Private Limited ("Amazon") has used reasonable endeavours in compiling the information provided, Amazon provides no assurance as to its accuracy, completeness or usefulness or that such information is error-free. In certain cases, the blog is provided by a third-party seller and is made available on an "as-is" basis. Amazon hereby disclaims any and all liability and assumes no responsibility whatsoever for consequences resulting from use of such information. Information provided may be changed or updated at any time, without any prior notice. You agree to use the information, at your own risk and expressly waive any and all claims, rights of action and/or remedies (under law or otherwise) that you may have against Amazon arising out of or in connection with the use of such information. Any copying, redistribution or republication of the information, or any portion thereof, without prior written consent of Amazon is strictly prohibited.

*Map not to scale. The map has been used for design and representational purpose only, it does not depict the geographical boundaries of the country. These do not conform to the external boundaries of India recognized by the Survey of India.
Related Blogs
How to Register as an Amazon Global Seller
6-Step Guide: How to Apply for IEC
Guide on how to export from India
Success Stories
California Design Den's Success Journey with Amazon Global Selling
How Shreya Vora Expanded her Jewelry Business with Amazon Global Selling
Watch a Seller Success Story

Register now to export from India

Where do you want to start exporting to?

Register now and get three-month subscription at just $1*